“
We are told that a woman’s life is attached to a man and that we mean nothing unless we are married.
Hema, student at Baduku College , 2015
“
Even though I’m a science student, in my college they don’t talk about our anatomy and our bodies. This is a science, why don’t we talk about it openly?
Anonymous , YRC

Gender is an aspect of our lives in which the most entrenched socialisation takes place from a very young age. In the Indian context, we experience and are “taught” a range of ideas, behaviours and values related to gender – within our families, in our educational institutions, in our workplaces and in public spaces.

This learning leads to a host of problems for young women and men who are transitioning from childhood into the adult world.

These are just some of the problems that young people face. In all this, young women and men belonging to marginalised communities are faced with added disadvantages because of their caste, class, religion and ethnicity. According to UNICEF, India ranks 6th in the world
for higher rates of marriage before the age of 18.

Young people need to have the space to unlearn the ideas, behaviours and values that lead to the problems listed above, and
to become leaders who will take us into a future in which

At Samvada, we help young women and men (including young trans women and men) understand that gender equality is their right.

Gender justice is a strong theme that runs across all our programs in Samvada. By unlearning the gender hierarchies they are socialised into, young people can blossom into advocates of gender justice.

Our Activities on Gender Equity

Through our activities, young people learn the self-awareness, knowledge, and skills through which they can make this equality a real part of their lives and the world around them.

In our workshops, young people are guided to observe and reflect upon the gender inequalities that they see in society around them. They are taught to question the assumptions that they have accepted as fact, and to look at each individual as being worthy of respect, no matter what their gender or sexual orientation.

They also learn about the modalities of relationships and marriage; topics that are relevant since many youth from disadvantaged communities are married at a young age and do not receive adequate preparation for this phase of their lives.

“
I had a big inferiority complex about my body, I was disgusted by it.
Now I love my body, I think I’m beautiful! Also, I didn’t know about sexualities and different sexual orientations, now I know these things.
Muslim Woman with Disability , GSRM workshop for Alumni of Baduku’s Counselling Course
“
There should be respect and equality between men and women, and there should be emotional understanding within relationships. I understood what I want in a life partner, and what expectations are involved in marriage; also understood that love and sexual desire/needs are different from each other.
Anonymous , Sakhi, Hospete
“
I’ve become so sensitive about sexuality, love etc that with my husband and my family members I can bargain, have dialogues and do what I want instead of sitting in my room and crying and getting disturbed. Now I know how to negotiate what I need with my family members.
- MSc Psychiatry Student , GSRM workshop for Alumni of Baduku’s Counselling Course Baduku – Centre for Livelihood Learning offers several courses based on Gender through its Centre for Wellness and Justice.

Disadvantaged youth can learn about Gender and Law, or become Counsellors for Women’s Wellness, and continue to work effectively towards gender equity for all.

As part of our Youth Leadership Programme, students design, organise, and lead campaigns to create awareness on social issues.

In 2015, they led DHWANI – A campaign on equal opportunity and Prevention of Sexual Harassment at Colleges.
In 2016, the campaign encouraging students to protest the phenomenon of ‘forced marriages’ was called HOLD ON! – A campaign for Education before Marriage. 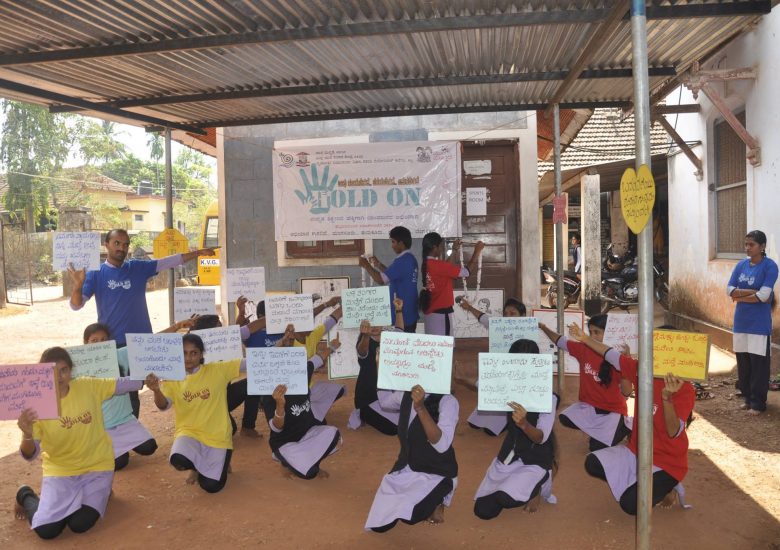 In 2015, they led DHWANI – A campaign on equal opportunity and Prevention of Sexual Harassment at Colleges. In 2016, the campaign encouraging students to protest the phenomenon of ‘forced marriages’ was called HOLD ON! – A campaign for Education before Marriage.

We have also conducted workshops for young men on consent. Rather than focusing solely on the girls in a community, we believe that boys need to be educated on the issues of sexual consent.

Previous
Next
“
Five years ago, I had a very warped idea about sex and sexuality. That women have agency and opinions was alien to me. But here, I'm learning that I can't dictate what a woman decides to do. I have to respect her.
-Nanjundaswamy, 24 , Participant 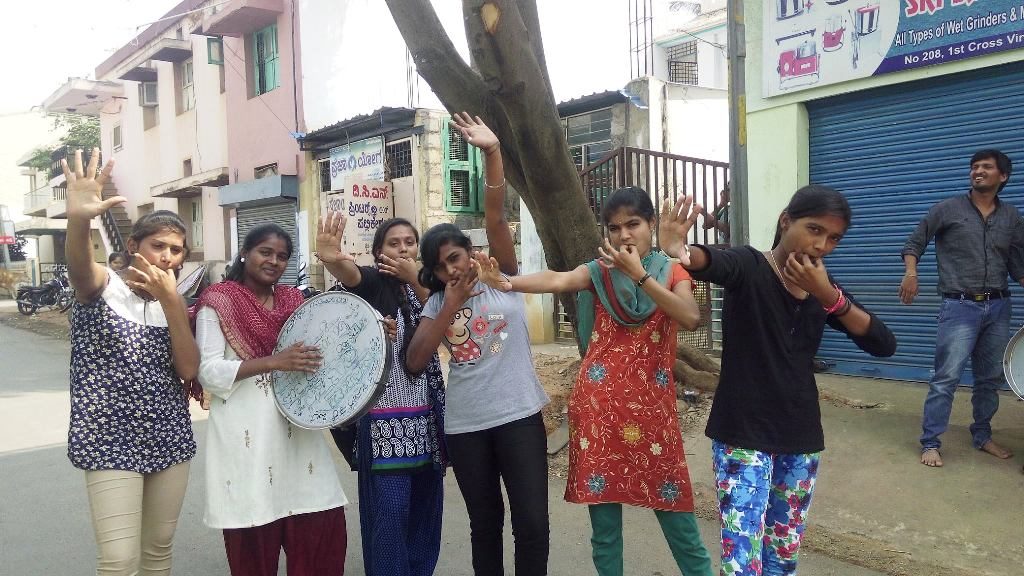 Creating support spaces for women to gather, share their experiences, and draw strength from one another is of paramount importance in addressing gender inequality.

In 2006, we helped set up Girls Collectives Sakhi, Sakshi, Bhoomika, and Sahachari at Dodballapur, Bangalore, Anekal and Ramnagara. In 2009, we facilitated the formation of an Independent Garment Workers Forum for Women, called Munnade.

Taking the time to celebrate and honour women allows women and young girls to find joy and pride in themselves, while raising awareness of the difficult circumstances they encounter in their lives. We organised Mahila Habbas (Women’s Festivals) in Anekal, Ramnagara and Dodballapura, between 2003-2007.

In 1994 , Samvada along with Dr Shekar Seshadri of Nimhans conducted the first ever Indian study into the issue of Child Sexual Abuse. The study was done through interactive workshops in 13 different colleges in and around Bangalore. Stories were told to explain what CSA is and young people then gave us data about their experiences of “eve teasing”, sexual overtures, molestation, rape, and other forms of Childhood Sexual Abuse. The study was widely disseminated through the press and led to many other organisations taking up the issue, establishing help-lines, working on changes in the Law, and spreading awareness about the endemic nature of Child Sexual Abuse in our homes, schools, and public spaces. The report, and a small booklet for parents and teachers is available on request.

In 1997, Samvada collaborated with Sakshi, an organisation in Delhi to study Gender Bias in the Judiciary. This was a study done in different states with various organisations conducting the interviews. Samvada did the Karnataka part of the research and interviewed judges, lawyers, court officials, litigants and witnesses, to ascertain the ways in which gender bias manifests in our judicial system. The Publication Gender and Judges is available with Sakshi and with Samvada.

In 2009, before we launched a course on “Feminist Counselling” we commissioned a market feasibility study to understand the need for counselling services, delivery options, the market for paid professional counselling and the feasibility of a Barefoot counselling course.