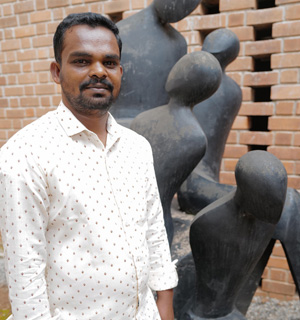 Lokesh hails from Ravagodlu, Hosapalya. He is now settled in Banjarpalya with his family which is nearly a 10-minute walk away from the Samvada campus. He completed his SSLC from Thatguni. After-school hours meant playing volleyball, cricket, carrom with his friends regularly. The love for sports and games continued since, but he isn’t able to make as much time for this like he used to.

Before joining Samvada, Lokesh worked at a dyeing factory until it moved to Kengeri and it was hard to travel the distance. He then took up electrical work but the pandemic took that away from him. He then worked on their family farm until an acquaintance put him in touch with Samvada.

Lokesh is on campus before most staff arrive and his face is one of the first you’ll see on a work day. As they come in, he greets them with a wave and a smile without fail and asks them if they’ve had tea.